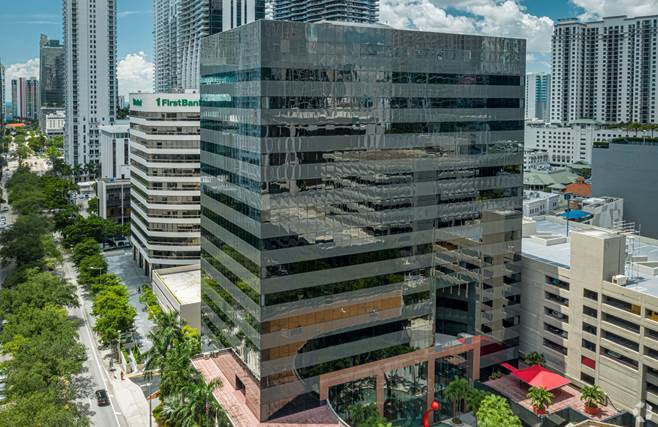 Why Miami’s Fastest-Growing Neighborhood, Brickell, is the Perfect Place to Grow Your Business

It wasn’t that long ago that the neighborhood just south of downtown Miami consisted of elegant, stately mansions from a by-gone era, built by its namesake, Miami’s legendary real estate icons, the Brickell family. Along with a handful of banks, the low-key area was mostly residential, until hi-rise buildings and urban sprawl began to move into the area. Today, Brickell is a vibrant vortex of finance, as the third-largest banking center in the US, behind NYC and Charlotte, NC. When Brickell started to grow as a financial center, due to growth spurred by Latin American capital investment in the area, developers invested in hi-rise condo after hi-rise condo and everyone wondered how they could fill these sky-reaching residential towers. During the Great Recession, millennials, looking for cheap rents took advantage of the economic downturn, filling up the skyscraping condos. According to The Miami Herald, “Brickell’s population has nearly tripled since 2000, to nearly 35,000 this year, making it the most populous neighborhood in Miami’s revived downtown.”

Because of its physical proximity to Latin American companies, Brickell plays host to many Latin businesses and banking institutions, in addition to insurance and real estate companies, including the Central American and Caribbean advisory firm, Pan American Finance and French firm and Credit Agricole. Brickell also acts as a tech hub for South Florida. Brickell is also home to many of Miami’s foreign consulates, including Argentina, Chile, Ecuador, France, Japan, the Netherlands, Switzerland, and the United Kingdom.

With residents come businesses to support them

As more people started to move into Brickell, restaurants, grocery stores and retail shops began to appear. Recently, mixed-use buildings are on the rise. Because of the dense, urban nature of this area, Brickell City Center provides a welcome innovation for residents and visitors alike. Referred to as a “massive city-within-a-city,” consisting of “two office buildings, a hotel and 500,000 square feet of shopping — including a Saks Fifth Avenue, an Apple store and a dine-in movie theater” according to The Miami Herald.

This project, considered a “game-changer for downtown Miami,” Brickell City Center incorporates traditional retailers into an area where these kinds of business are missing.” The Miami Herald reported that Zach Winkler, a retail broker at CBRE said, “you have offices, you have condos, you have restaurants and bars [already in the neighborhood], but you don’t have traditional retailers.” However, walking distance away lies lifestyle center Mary Brickell Village, with its collection of boutiques, specialty shops, and popular eateries that keep popping up there so those who have chosen to call Brickell home don’t need to go anywhere else to run errands or enjoy a night on the town.

Many of the mixed-use buildings are including pre-schools, plus more kid-friendly places and events for children. Although Greater Downtown Miami accommodates hundreds of elementary and middle school children, the demand for high schools is increasing as millennials’ kids turn into teenagers. There is already talk of at least one charter high school interested in entering the neighborhood. Miami features 148 beautiful parks, gardens, recreation areas, and playgrounds where families can make the most of outdoor living, including 1814 Brickell Avenue, Jose Marti Park, Brickell Key Park, and Alice C. Wainwright Park, just to name a few of those nearby with plenty of others close enough for an afternoon outing.

Access to exploring and playing in and around Brickell is easy with Miami’s free 5 am-midnight Metromover/Metrorail system connecting Brickell to major destinations seven days a week. Plans are in the works to alleviate traffic congestion in Greater Miami. Promoters of making Brickell a more walkable city offer many solutions like those that have been implemented in Manhattan. High tourist areas, such as Broadway have done away with automobile traffic, turning midtown Manhattan into a pedestrian mall. Is this in Brickell’s future? Time will tell.

Thinking of growing your business in Brickell?

With commercial office spaces at a premium in this bustling downtown Miami neighborhood, CoSuite Brickell offers flexible, shared desk and private office options in addition to conference rooms where you can host your quarterly meeting or a training session. Unlike other coworking spaces, CoSuite Brickell not only saves businesses the expense of lengthy, long-term leases, setting up an office with business equipment, hiring support staff and the amenities needed to sustain an office environment, but it also offers an upscale professional location. A community of established small- and medium-size businesses work alongside each other in an executive suites-like atmosphere. Well-appointed surroundings with designer furnishings, business class equipment, along with a live receptionist enhances your business to scale and meet your expansion needs.

CoSuite Brickell offers Latin American businesses looking to establish a US presence the opportunity to set up a virtual office address, giving them a professional Brickell office address. Latin American businesses can also take advantage of CoSuite Brickell’s location to meet with clients in an impressive setting. Other space options, including private office suites, are available for Latin American companies to rent as a satellite office for remote teams. Miami is a hub for expansion and Brickell sits in the hotspot for business growth and expansion. With such a dazzling outlook for business growth, amid captivating and innovative restaurant, entertainment, and shopping options, CoSuite Brickell provides the best of everything you need to move your company forward in downtown Miami.